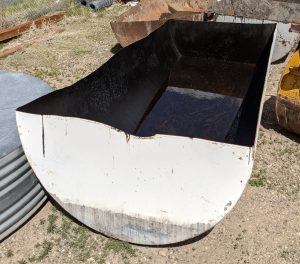 The City of Helena contracted with Olympus Technical Services, Inc. to decommission and remove a 2,000-gallon waste oil tank from the yard of their vehicle maintenance facility at 3001 E. Lyndale Ave. The city had been using used oil stored in the tank to heat the shop, but sludge had built up over time and decreased the storage capacity of the tank by a third.

Olympus opened the tank and allowed vapors to dissipate. After atmosphere testing confirmed that it was safe to do so, the tank was cut lengthwise with a reciprocating saw. The top half was removed with a mini excavator, revealing that a significant volume of liquid remained in the lower half of the tank. 250 gallons of oil had to be pumped out before the sludge could be stabilized in place with sawdust, loaded into a plastic-lined dump trailer, and transported to the Lewis and Clark County Landfill for disposal. The tank halves were transported off-site for recycling.